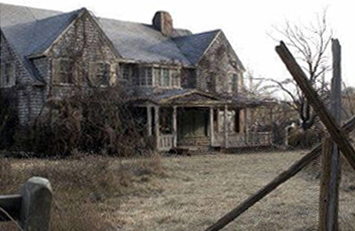 Are you familiar with the extraordinary documentary of 1975, Grey Gardens? If not, you’re missing out on one of the most notorious, real-life, real estate nightmares. This dilapidated mansion fell into such a state of disrepair that county officials considered it to be a health hazard and threatened to condemn the property. Before it was finally sold and rehabbed to its former glory, Grey Gardens was riddled with stray cats, raccoons and fleas, not to mention extensive damage to the structure, an overgrown lawn and filth everywhere.

Just in time for October, we’re sharing 10 Home Renovation Nightmares. These are true stories of horrors people have encountered when trying to do their own rehab work for their fix-and-flip properties. Readers beware…you’re in for a scare!

A Florida man paid thousands to have hurricane-impact windows installed in his home. After a tropical storm hit, the windows passed the test, with the exception of a small leak. A few days later, his wife informed him that mushrooms were growing out of the window and into the living room. She refused to come back into the house until they were removed and the problem solved. The Florida man ripped out a piece of the wall to identify the problem and soon realized that water damage trickled down into joints of the entire living room wall. After spending an additional thousand, the walls were replaced and mushroom-free. However, he learned that the mushrooms grew due to a contractor not pulling a permit to install the windows. A county inspector would have easily detected the windows and walls hadn’t been sealed properly. The Moral of the Story: EVERY job, big or small, must be done with a permit and inspected by a professional. It may cost a bit, but will save you thousands in the long run. Unless having mushrooms in the walls is your thing.

A New York City girl decided to move to the country for a change of pace. She found a lovely home that she believed she could improve with some renovations and additions. While her dream additions and rehab vision was being executed, she decided to check in on the progress. The construction crew digging the foundation for the addition informed her that they accidentally hit the septic tank. Clean up on aisle four. The Moral of the Story: Before you go crazy with renovation plans, do a thorough inspection of the ins and outs of the property, especially the location of the septic tank.

During a kitchen renovation, a Canadian woman realized she couldn’t find her cat anywhere. She shrugged it off and went to work, thinking the cat was probably just hiding from the construction workers. After the woman returned, she still couldn’t locate the house cat. The contractor informed her that she needed to find the cat immediately or it might end up trapped behind some drywall. She and her husband searched frantically for the cat. Her husband dropped an item which rolled into the subfloor, which seemed a large enough space for the cat to squeeze through. They searched between the floorboards of the kitchen and the basement ceiling and the cat was found snuggled up in a dark, cozy corner. She was found just before the contractor finished installing the floor boards. The Moral of the Story: Get your pets out of the house during remodeling, or they may become an unfortunate permanent fixture in the upgrade.

A gal from Minnesota wasn’t digging the popcorn ceiling in the kitchen of her home. Her husband agreed: popcorn belonged in the microwave or a bowl, not on the ceiling. They hired a contractor to redo the popcorn ceiling with a lightly textured finish. Unbeknownst to the Minnesota couple, the contractor hired a sub contractor, who applied the texture to every wall, ceiling and surface in the kitchen. By the end of the project, the entire room looked like a mummy covered in textured gauze. It all had to be scraped down, sanded and smoothed out, which set the project back weeks. The Moral of the Story: Be involved in every step of the process and communicate clearly. A rehab project should NEVER turn into a game of telephone.

A DIY couple from Oregon who watched many an episode of Rehab Addict, decided they could easily install drywall themselves. They took it upon themselves to drywall the bathroom and took a few days off work to ensure it would be done right. After working 3 days straight, they hung a grand total of three pieces. It was far more complicated than they anticipated. They finally gave in and hired some professionals to finish the job, who were able to do 10 times the work in 30 minutes than the husband and wife team accomplished in three days. This nightmarish remodeling experience was enough to keep the couple from ever doing a renovation job themselves again. The Moral of the Story: Some projects are best left to the experts…especially when you’re working against a deadline.

A man from Texas had an unfortunate encounter with a cabinet manufacturer from hell. During the course of his kitchen rehab, the company sent him the wrong size cabinets not once, but twice. They also took the wrong measurements and ended up installing a sink the size of Houston. As the company worked to correct the mistakes, the rehab was delayed and the Texas man had no choice but to cook his meals in a turkey roaster and wash his dishes in the bathtub. The Moral of the Story: Do your homework regarding reviews and referrals before you hire a company to do a job. A good reputation goes a long way and can save you time, money and aggravation in the long run.

An Ohio man decided he had enough with the tacky, 1970s wood paneling in his living room. After watching a few “How-To” videos on YouTube, he decided to remove the paneling himself with the help of a friend. While they were removing the paneling, they encountered a particularly stubborn panel. They ended up ripping it off with too much force and ripped a hole in the wall in the process. Before they could react, blown-in insulation started pouring out of the hole. They soon learned there was no stop between the first and second floors, so the insulation from the second floor started to pour out of the hole with all the force and fury of an avalanche. The Moral of the Story: If you insist on doing a job yourself, take your time with it. It’s far better to work slowly and correctly, rather than risk tearing an enormous hole in the wall in haste.

A woman with her daughter moved to a new home in Missouri a month before her husband got out of the military. They got a great deal on this house, but were made aware that the home needed some remodeling. Enchanted by the low price, the woman snatched up the deal. Soon after moving in, the woman and her father got to work with some of the renovations. After tearing out a bathroom closet, they discovered major termite damage. They ended up having to gut the entire bathroom which rotted due to the termite damage. The Moral of the Story: Nothing is free and you get what you pay for. Believe it or not, many people skimp on the inspections to save time and money, but they are worth their weight in gold. Don’t let a low price blind you to potential problems.

A happy couple in Maine discovered they were expecting their first child. Naturally, their first inclination was to present the new baby with a gift: a remodeled master bathroom. They begin work on demolishing the bathroom when she is one month pregnant, believing the remodeling job will take no more than three months. However, like so many DIY projects, the remodeling took longer than they anticipated, and the pregnant wife had to conquer two flights of stairs to use the only other functioning bathroom in the house…for the next eight months. They soon realized that not only would the project not be completed before the baby arrived, but there were many elements of the plumbing which hadn’t been done correctly. They finally turned the project over to a professional, who was able to finish the remodel soon after the baby was born. The Moral of the Story: Any home remodeling project is difficult enough to tackle…but to tackle one while pregnant means one of two things: either you’re superwoman or a glutton for punishment.

A woman reported that her parents hired a contractor to repair their roof after it was badly damaged during a snowstorm. The crew were able to fix the roof, but accidentally sealed in a raccoon. Unfortunately, the animal died and a terrible odor permeated the premises. When her parents got in touch with the contractor and let him know about the issue, he simply replied, “Animal removal is not our job.” They ended up spending hundreds more to find and remove the deceased critter. The Moral of the Story: This goes along the lines of #6 – Research your contractors beforehand and pick the ones that will work with you in case of an accident or crisis. The ones who throw their hands up and claim it’s “not their problem” at the first sign of trouble are definitely not worth doing business with.

Rehab and home renovation projects can have their share of troubles, but fortunately, there’s a solution! When you do rehab deals with Do Hard Money, we will not only provide funding, but we provide your very own account advisors and project managers to help identify and nip potential problems in the bud so you won’t have to go through anything like what was listed above! We would love to help fund your next deal. Click on this link to schedule an appointment to chat with us or you can give us a call at 801-692-7703. We can answer your questions and help you avoid the horror stories which can come with fix-and-flips.